Prostate Diary: The Docs Weigh In

One of out every seven men will get prostate cancer, and it's thought that all of us would if we didn't die of something else first. Prostate cancer kills about 25-30,000 men every year -- the most cancer deaths among men who don't smoke. For whatever reason, is a scourge among African-American men.

For what it's worth, I was not at risk: No family history of the disease, I'm in good physical condition, and I eat and drink in moderation. Sometimes, you just get it.

The diagnosing urologist presented me with two treatment options -- surgery and radiation -- and recommended that I read up on the subject and consult a radiation oncologist before deciding on treatment. He thought that at my relatively young age I would want surgery, and then added "but then I'm a surgeon." He recommended two books in particular, both of which proved problematic.

In the event, I read from the books, talked with survivors, and consulted with three urologists, a radiation oncologist, and a medical oncologist. The urologists included a robotics surgeon, a standard cut surgeon, and a brachytherapy (seed implants) surgeon. The collective advice was emblematic of the frustration and difficulty of dealing with this disease:

Urologist #1: Don't do radiation. Get it out and get on with your life. (The problem is that this is easier said than done.)

Urologist #2: You should probably get surgery, but radiation is a defensible option.

Urologist #3: You can do whatever you want. You're going to do well no matter what.

Oncologist #1: Your chances of a cure are the same (roughly 75% for localized Gleason 7 prostate cancer), so it comes down to a choice of side effects. But you have to do something.

Oncologist #2: Don't get surgery: You'll regret it. The outcomes are the same, so why court impotence and incontinence?

I wound up believing that there are good reasons to go either route, depending on who you are. I chose external beam radiation -- I'll get into why -- but I wouldn't presume to tell any man that that's what he should do. This time, it really is all about you.
Posted by K. at 4:20 PM No comments:

Last May, while walking across the corporate campus where I work, the physician's assistant at my doctor's office called to tell me that I had an elevated PSA count of 6.7. The prostate-specific antigen is a protein produced by both normal and malignant prostate cells. Roughly speaking, as long the PSA count remains below 4.0 (and there's nothing palpable), men can assume that the antigen is being produced by normal cells. When the count goes above 4.0, a physician will usually recommend a consultation with a urologist. In my case, the PA had already scheduled an appointment. She said that the urologist would likely want to perform a biopsy.

My appointment was in two weeks. Honestly, I didn't think much about it. I knew that PSA readings were often false and that there were reasons other than prostate cancer for an elevated count. The urologist said as much -- he didn't want to recommend a biopsy on the basis of a single reading, and confirmed that there was no palpable evidence of a tumor. Moreover, none of the symptoms of prostate cancer were present. He recommended a second PSA test and -- in the event -- performed a third.

The results were not encouraging: The count for the second test was 7.1, and dropped slightly to 6.9 for the third check. The urologist recommended a biopsy and told me that there was a 50-50 chance that I had prostate cancer.

Two weeks later, I underwent a prostate biopsy, an invasive, depressing procedure that left me shaken. Three weeks after that, the urologist informed me that I had prostate cancer. The tumor, he explained, looked to be localized, which was to the good: This meant that the goal of treatment was a cure.

A biopsy on a normal-sized prostate involves taking six samples from the left and right sides of the prostate. A pathologist reads the samples and -- after the findings are confirmed by a second pathologist -- issues a report. My report showed that three of the samples from one side of my prostate tested positive for cancer -- two of them were classified as <50% cancerous and one as <30% cancerous. The other side was cancer free.

The pathologist also issued a finding on the aggressiveness of the cancer -- its Gleason score. The higher the Gleason score, the more likely the cancer is to spread. The average Gleason score for a man diagnosed with prostate cancer is 6; mine is 7. A Gleason of 7 is significant because it eliminates the option of active surveillance, in which the cancer is monitored but not treated.

The urologist advised me to have a CT scan, which he thought would confirm that the tumor had not spread beyond the prostate. He seemed confident that it had not, which the CT in fact confirmed. He did not think that an MRI was necessary, a conclusion that I later came to question. 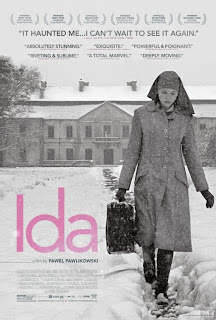 Ida (2013) D: Pawel Pawlikowski. Agata Kulesza, Agata Trzebuchowska, Dawid Ogrodnik. A noviate (Trzebuchowska) comes to grips with her Jewish past and Catholic future in post-War Poland with the help of a disillusioned aunt (Kulesza) and a Coltrane-loving musician (Ogrodnik). The subtext of this somber but inescapably compelling movie is about the immense capacity of moviemaking to convey truths in a highly personal manner. Many of the square-framed shots begin as still photographs that stir to life with almost imperceptible movements. This one will stay with you.

The Republican War on Everyone Else

Congressman Ryan is from one of the wealthiest Wisconsin districts, just across border from Illinois and a favored bedroom area for wealthy commuters from Chicago. He's representing the wealthy voters to whom everyone not one of them is invisible.

Congressman Ryan proposed earlier budgets in which he would have eliminated the health care for children (CHIPS.) His constituents didn't protest. As far as they're concerned, Americans working for a living are lucky to be employed and should have worked harder and studied harder.

His constituents pay to keep him in office because he'll carry their water: make it possible for the strong to prey on those who lack their wealth and connections. It's something the working people in this nation fiercely fought to overcome in the 1930s, 1940s, and even into the 1950s.

I still recall when my father was a petroleum company executive during a refinery strike during my younger years and him telling how he had to low-crawl to his car after his month of working to keep the refinery operating. I remember the wives of the workers in that strike coming to our rural home with their children, and asking for food and toilet paper. I recall my mother answering the door with a revolver in one hand hidden behind her back. I recall us setting up a a pantry in the garage and my mother telling them she couldn't feed them all but would help in emergencies. I recall my father expressing amazement that after low-crawling to the car, the union workers opened the gate and waved him out. I remember his consternation when my mother showed him the garage pantry and explained why they'd waved him out. She said the strike was between the men, and union or not, she'd always share her food with mothers and children. I remember our house being shot at and seeing the bullet holes in the living room window.

I recall one of my father's friends over one evening talking to him about a railroad strike. He told of how union workers had been found along the rail bed beaten black and blue. About that moment he looked up and remarked to my father that "little ears were nearby" and he'd better stop or there'd be nightmares. I was sent to bed.

I recall the news stories on WGN radio about acid being thrown into truckers' faces during trucking strikes.

I recall the death threats sent to my parents about kidnapping and killing me. I recall at age 7 people in Halloween masks attacking the windows on my bedroom and I then recall being taken to St. Louis where a large black German Shepherd named Windy and I were trained together for my protection. I recall the annual re-training through my eleventh year. That probably had a lot to do with my father regularly took me overseas with him.

That is the era back to which Congressman Ryan and his bought, phony, grass-root supporters want to take us: the era of real class warfare. It's sick. They're morally corrupt.

Congressman Ryan's budget isn't the least bit serious. It's not a budget to build a great nation. It's a delusion concocted by his vanity egged on by the thought of accolades and personal riches from this nation's wealthiest. Congressman Ryan's budget has all the scope, insight, and foresight one might find in the Christmas wish list of a sheltered, spoiled child.

places then
as now

all lie
in ruins

as much
as I can do

to save
even one

Juan Cole's Open Letter to the Left on Libya

Juan Cole was an early, articulate, and prescient opponent of the Iraq War. His blog, Informed Comment, became the go-to place for those of us seeking to construct a knowledgeable case against the war. Professor Cole supports the intervention in Libya, and explains why here.

Cole analyzes differences in the left over the intervention as a matter of cognitive dissonance: On the one, the left supports the efforts of ordinary people to free themselves from tyranny; on the other, it opposes as imperialism military intervention in their lives. In the case of Libya, Cole believes that the opportunity to rid the Libyan people (and the world, for that matter) of the sociopathic predations of Muammar Qaddafi is paramount and must be exploited.

The responses opposing Cole's position are depressingly predictable, illustrating a doctrinaire intellectual vacuity that substitutes sloganeering for critical thinking. To be fair, the left is hardly alone on that score...
Posted by K. at 7:22 AM 5 comments: