The Weekend That Was... 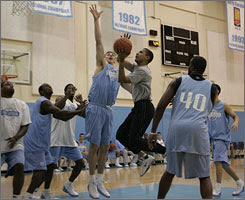 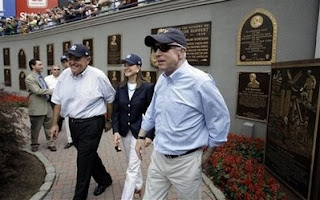 What a rotten weekend (and continuing) for John McCain. After months of being sniped at not spending enough time in Iraq and Afghanistan, Obama's Middle East tour has so far been a complete success. Starting with the successful meeting with Afghanistan's leaders, Obama shot hoops for the troops in Kuwait, even draining a three-pointer. Better yet, Iraq's Prime Minister Maliki all but endorsed the Obama plan for a 16-month withdrawal from Iraq. Despite attempt to spin Maliki's remarks as being misquoted or taken out of context, the New York Times confirmed them here...
Both the White House and McCain are in a dither over the Maliki Pivot. McCain insists that "conditions on the ground" ought to drive decision-making in Iraq, but it seems to me that that is exactly what is happening. After all, aren't Iraqi politics part of "conditions on the ground"? Don't they get a say in whether and how long foreign troops occupy their soil. (Oh, wait a minute...I guess not. ) The whole problem in Iraq from the get-go has been the Administration's ironclad conviction that they can impose a military solution on a political problem. And now, McCain offers more of the same. Plus, there are also "conditions on the ground" in the United States, whose people simply don't support the war. McCain claims that the surge has "worked." Fine. Let's declare victory and get out...
The Los Angeles Times uncritically reports that "As Sen. Barack Obama headed to Iraq for his first visit as a presidential candidate, his plan for bringing the war to a swift conclusion was triggering a political furor abroad and at home, with a U.S. military leader declaring Sunday that setting a hard deadline for withdrawing troops is risky." No one explains how setting no deadline has been been a redoubt of stability...
South Texas prepares for Hurricane Dolly. South Texas may not mean much to most, but there are those of us who have a great deal of affection for a place of which my brother once said "if it has thistles or thorns, it grows in South Texas." It's hot, it's flat, and it makes you grow up appreciating the niceties of the shade of a mesquite tree. For better or worse, it's as much Mexico as the United States. But it has its stories and its history like any other place, and the people who live there are attached to it. So remember: Whatever havoc (and hopefully, it won't be much) Dolly wreaks, it's not the fault of the people who live there. Did you hear that, Ann Coulter, Sean Hannity, Bill O'Reilly, and Rush Limbaugh? Luckily, South Texas doesn't depend on the promises of the Army Corps Of Engineers...
Many thanks to Foxessa for passing along this fascinating analysis of Yeats' "Sailing To Byzantium," the poem that begin with "That is no country for old men." In an accessible and enlightening way, the 10-minute video explores such seeming minutiae as Yeats' struggle to find exactly the right word with which to begin "Byzantium" (he also considered "Here" and "There") while showing how the poem conveys Yeats' grappling with encroaching old age. Watch this video, and you'll understand why the poet's choice of a single word isn't a matter of minutiae, but an artistic dilemma that can impact the meaning and direction of a work...
Ya know, I was sayin' to my wife just the other day that what this country needs is more young people defending the status quo. So my heart just breaks for these kids. It really does.
Posted by K. at 8:54 AM

Aw Hell! We were all about to thank Y'all for pulling Dolly your way wit'all yer sinfullness like...Literatureism...and progressivism...and, and...yer dirty Sinn Féin nessiness!
Naaah...we wit'ch'all Y'all down there in the lands of pretty horses and homeland security.
Really, I check on Dolly about every few minutes, thinking of y'all so you have Editilla wit'da Big Eye on'yaz.
Take care, and call if you need a place to stay if'n y'all gotta jump. I don't mean all of yaz...well, maybe...just run don't walk this time.

Pardon my French but it looks like this Beotch will be right on top of y'all tomorrow morning early.

My father is in Kingsville, a 150 miles or so from McAllen. He never leaves.

Yeah well...ok. I ain't gone argue wit'yer daddy or mine. I mean, it is looking like a Cat 1 so your Pop probably figures that as a fey dust-up, eh? Ha! Takes more than that to move a country of old men.
Well, take care anyway, the hard place will be maybe Brownsville, north of landfall, which is lookin like the USMEX border, maybe a little north of that...sorry, I'm into this stuff.
And I done'got fonda'yall and all...whaaat me worry?
Editilla

And then he goes to Iraq and two days ends the war that can't be ended They Said. Maliki agreed with the plan!

So of course the languagemangler had to put Maliki straight on that.

I hope your dad and all the others will be fine. Hurricanes lose power when they come to land, and she's only a Cat 1, so I'm pretty hopeful.

My father was killed in Brownsville -- a bus broadsided his car, on his, the driver's side. My stepmother barely survived, and did merely by moments. The first person on the scene was a paramedic who had a jaws of life in his vehicle, and was able to call a medivac helicopter. They got her on the operating table with merely seconds left of her life, got her stablized and she's living a very happy life today.